In 2001 helped by his family, John Mills established the Tower Brewery, continuing in the long tradition of brewing in Burton on Trent. 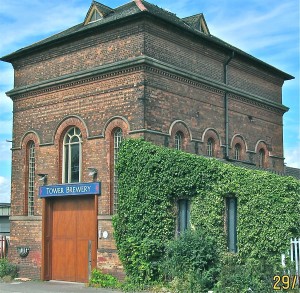 Over a period of nine months and with a lot of hard work, John and his father Geoffrey converted the handsome water tower, in which the brewery is now based.

Steeped in brewing history and known as Walsitch Maltings, the tower was built in the 1870s by Thomas Salt & Co Ltd., and later in 1927 owned by Burton brewers Bass & Co.

With the conversion finished and the building returned to its former heritage, production began on 10th April 2001.

Aided by the height of the tower, which uses gravity to feed the Grist case and supply the water pressure, John has gone on to create award winning beers and the hard work has paid off with a Civic Society award for the restoration of an industrial building.

You can now sample the unique atmosphere, (along with the beer!) through John’s knowledgeable tours or by hiring the venue for your own event.